Latest
You are here: Home / Tag Archives: islam is

Authority of Hadith in the Light of Qur’an 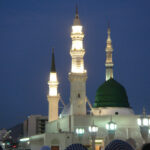 Waqar Akbar Cheema 1. Introduction Since the beginning the Muslim Ummah has unanimously believed in Hadith as an established secondary source of the Islamic Law after Qur’an. Infact it has always been recognized only another kind of revelation i.e. it is called وحي غير متلو i.e. Revelation that is not recited. In recent past some pseudo-scholars have come up with ... END_OF_DOCUMENT_TOKEN_TO_BE_REPLACED